Solid yellow lines mark the center of a road used for two-way traffic.

Broken yellow lines indicate that you may pass if the broken line is next to your driving lane.

Two solid yellow lines indicate no passing. Never drive to the left of these lines unless you are:

Two sets of solid double yellow lines spaced 2 feet or more apart are considered a barrier. Do not drive on or over this barrier, make a left turn, or a U-turn across it, except at designated openings (see diagram).

Double white lines are two solid white lines that indicate a lane barrier between a regular use and a preferential use lane, such as a carpool/HOV. Never change lanes while in these lanes; wait until a single broken white line appears. You may also see these parallel lines in or near freeway on and off ramps.

Drive in the lane with the smoothest flow of traffic. If you can choose among three lanes, pick the middle lane for the smoothest driving. To drive faster, pass, or turn left, use the left lane. When you choose to drive slowly, enter or exit traffic on the right, turn right, park, or move off the road, use the right lane. If there are only two lanes in your direction, pick the right lane for the smoothest driving. Do not weave in and out of traffic. Stay in one lane as much as possible. Once you start through an intersection, keep going. If you start to make a turn, follow through. Last minute changes may cause collisions. If you miss a turn, continue until you can safely and legally turn around.

Before changing lanes, signal, look in all your mirrors, and:

Before you pass, look ahead for road conditions and traffic that may cause other vehicles to move into your lane. Never drive off the paved or main- traveled portion of the road or on the shoulder to pass. The edge of the main-traveled portion of the road may have a painted white line on the road’s surface. Passing other vehicles at crossroads, railroad crossings, and shopping center entrances is dangerous.

Pass traffic on the left. You may pass on the right only when:

An HOV lane is a special lane used only for carpools, buses, motorcycles, or decaled low-emission vehicles. You may use a carpool/HOV lane or on-ramp if your vehicle carries the posted minimum number of people required for the carpool lane, or you drive a low emission or a zero emission vehicle displaying a special DMV-issued decal. If you operate a low emission, zero emission, and/or hybrid vehicle, you may be exempt from all toll charges on high occupancy
toll (HOT) lanes. Motorcyclists may use designated carpool/HOV lanes, unless otherwise posted. 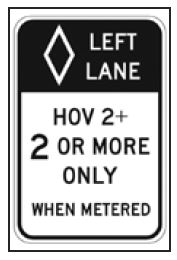 Signs at the on-ramp or along the freeway tell you the minimum number of people per vehicle required for the carpool/HOV lane(s). These signs also list the days of the week and the hours when the carpool/HOV requirement applies. The pavement in this lane is marked with a diamond symbol and the words “Carpool Lane.” These lanes are also known as HOV lanes. Do not cross over double parallel solid lines to enter or exit any carpool/HOV lane except at designated entry or exit places.

When turning left from a side street or driveway, signal and wait until it is safe. Then you may drive into the center left turn lane. Enter traffic only when it is safe.

Special “turnout” areas are sometimes marked on two-lane roads. Drive into these areas to allow cars behind you to pass. Some two-lane roads have passing lanes. If you are driving slowly on a two-lane highway or road where passing is unsafe, and 5 or more vehicles are following, you must drive into the turnout areas or lanes to let the vehicles pass.

Freeway lanes, as well as some city street lanes, which are ending will usually be marked by large broken lines painted on the pavement. If you are driving in a lane marked with these broken lines, be prepared to exit the freeway or for the lane to end. Look for a sign that tells you to exit or merge, etc.

Yield lines, also known as “shark’s teeth,” consist of a line of solid white triangles across a lane of traffic pointing towards approaching vehicles. This line indicates the point where the vehicle must yield/stop.

A bicycle lane is a designated traffic lane for bicyclists defined by pavement markings and signage. Bicycle lanes are sometimes painted a bright green color to increase visibility.

There are multiple classes and types of bicycle lanes, including:

It is illegal to drive in a bicycle lane unless parking (where permitted), entering or leaving the roadway, or turning (within 200 feet of the intersection). Drivers of motorized bicycles should use caution to avoid bicyclists, and use bike lanes at a speed that is reasonable and does not endanger the safety of bicyclists.

This website uses cookies to improve your experience while you navigate through the website. Out of these cookies, the cookies that are categorized as necessary are stored on your browser as they are essential for the working of basic functionalities of the website. We also use third-party cookies that help us analyze and understand how you use this website. These cookies will be stored in your browser only with your consent. You also have the option to opt-out of these cookies. But opting out of some of these cookies may have an effect on your browsing experience.
Necessary Always Enabled
Necessary cookies are absolutely essential for the website to function properly. This category only includes cookies that ensures basic functionalities and security features of the website. These cookies do not store any personal information.
Non-necessary
Any cookies that may not be particularly necessary for the website to function and is used specifically to collect user personal data via analytics, ads, other embedded contents are termed as non-necessary cookies. It is mandatory to procure user consent prior to running these cookies on your website.
SAVE & ACCEPT