To reduce the chance of having a collision with a large truck or RV, you must be familiar with a big rig’s physical capabilities and how it maneuvers.

Trucker’s Blind Spots – The “No Zone”

Passenger vehicle drivers incorrectly assume that a trucker can see the road better because they are higher off the road. While truckers do have a better forward view and bigger mirrors, they still have large blind spots or “NO ZONES” where your vehicle can disappear from a truck driver’s view.

If you stay in those blind spots, you block the trucker’s ability to take evasive action to avoid a dangerous situation. Generally speaking, if you cannot see the truck driver in their side mirror, they cannot see you.

When a vehicle makes a turn, the rear wheels follow a shorter path than the front wheels. The longer the vehicle, the greater the difference in the turning path. This is why big rig drivers must often swing wide to complete a right turn. When you follow a big rig, look at its turn signals before you start to pass. If the truck appears to be turning left, check the turn signals again; the driver may actually be turning right but first swinging wide.

Trucks are not as maneuverable as passenger vehicles. Large trucks have longer stopping and starting distances. They take more space for turns and weigh more. When no signs are posted, these vehicles must be driven in the right traffic lane or as close as possible to the right edge of the roadway.

On a divided highway with 4 or more traffic lanes in one direction, these vehicles may also be driven in the lane just to the left of the right lane.

Avoid these mistakes when driving around large trucks:

Do not drive through a safety zone, which is a space set aside for pedestrians, marked by raised buttons or markers on a roadway. When people are boarding or leaving a streetcar or trolley where there is no safety zone, stop behind the vehicle’s nearest door or vehicle platform and wait until the people have reached a safe place. When a bus, streetcar, or trolley is stopped at a safety zone or at an intersection where traffic is controlled by a peace officer or traffic signal light, you may pass at no more than 10 mph.

Do not overtake and pass any light-rail vehicle or streetcar on the left side, whether it is moving or standing.

Light-rail vehicles have the same rights and responsibilities on public roadways as other vehicles. Although everyone must follow the same traffic laws, light-rail vehicles require exceptional handling ability because of their size.

Do not turn in front of light rail vehicles

You must obey any traffic direction, order, or signal given by a traffic or peace officer, or a firefighter even if it conflicts with existing signs, signals, or laws.

It is against the law to follow within 300 feet behind any fire engine, police vehicle, ambulance, or other emergency vehicle with a siren or flashing lights (CVC §21706).

If you drive for sight-seeing purposes to the scene of a fire, collision, or other disaster, you may be arrested. Casual observers interfere with the essential services of police, firefighter, ambulance crews, or other rescue or emergency personnel.

Some vehicles are not designed to keep up with the speed of traffic. Farm tractors, animal-drawn carts, and road maintenance vehicles usually travel 25 mph or less. Slow-moving vehicles have an orange/red triangle on the back of the vehicles. It
looks like the sign in the picture to the right. Look for these vehicles and adjust your speed before you reach them.

Also, be aware that large trucks, bicyclists, and small-underpowered cars lose speed on long or steep hills and take longer to get up to speed when entering traffic.

Other types of slow-moving motorized vehicles, such as wheelchairs, scooters, neighborhood electric vehicles (NEVs), and golf carts may legally operate on public roads. Adjust your speed accordingly to accommodate them.

Vehicles proceeding at a speed less than the flow of traffic and moving on a two-lane highway where passing is unsafe, must turn off the roadway at the nearest place designated as a turnout or wherever sufficient area for a safe turnout exists, if a line of 5 or more vehicles forms behind them.

When you see these signs or markings: NEV USE ONLY or NEV ROUTE, watch out for slow-moving vehicles in the roadway. NEVs and LSVs are restricted from roadways where the speed limit is greater than 35 mph (CVC §§385.5 and 21260). NEVs and LSVs reach a maximum speed of 25 mph. Owners of registered NEVs and LSVs must comply with financial responsibility laws and have a valid DL to operate the vehicle.

Horse-drawn vehicles and riders of horses or other animals are entitled to share the road with motor vehicles. It is a traffic offense to scare horses or stampede livestock. Slow down or stop, if necessary, or when requested to do so by the riders or herders.

Motorcyclists have the same rights and responsibilities as automobile drivers. While everyone must follow the same traffic laws, motorcyclists face additional dangers because motorcycles require exceptional handling ability and are harder to see. Therefore, many motorcycles keep their headlight on at all times, even during daylight hours.

Motorcyclists can do many things to increase their chances of being seen by drivers and other road users, including:

Bicyclists have the same rights and responsibilities as vehicle and motorcycle drivers, including:

Bicyclists shall not operate a bicycle on a roadway unless the bicycle is equipped with a brake which will enable the operator to make a one-wheel skid on dry, level, clean pavement.

During darkness, bicyclists should avoid wearing dark clothing and must have the following equipment:

Bicyclists have the right to operate on the road and may:

Bicyclists traveling slower than the flow of traffic must ride as close as practicable to the right curb or edge of the roadway except in the following situations:

Here are some critical points for drivers and bicyclists to remember. Motor vehicle drivers must:

Pedestrians Who Are Blind

Pedestrians using guide dogs or white canes with or without a red tip must be given the right-of-way at all times. These pedestrians are partially or totally blind. When these pedestrians are in your vicinity, be especially careful when turning corners or backing up, particularly if you are driving a quiet hybrid vehicle.

Here are some suggestions for helping pedestrians who are blind: 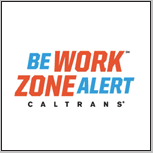 Signs and message boards warn you of workers, slow- moving equipment, and closed lanes ahead. Cones, drums, or other barriers will guide you through the work zone. Reduce your speed and be prepared to slow down or stop for highway equipment. Merge as soon as it is safe to do so and without crossing the cones or drums. In work zones where lanes are narrow or where the shoulder is closed, watch for bicycles and “share the road” when they are present. Watch for work zone speed limit and reduced speed limit warning signs.

For your own safety and the safety of your passengers remember to pass the work zone carefully, slow down, allow extra following room between vehicles, merge early, expect sudden slowing or stopping, watch for drivers changing lanes at the last minute, and avoid distractions while driving in a work zone. Distractions include using your hands-free cell phone, reading/sending text messages, and/or operating your GPS and entertainment systems. Fines for traffic violations in a work zone can be $1,000 or more. Anyone convicted of assaulting a highway worker faces fines of up to $2,000 and imprisonment for up to 1 year.

Do not stop or slow down to watch the road work. Obey special signs or instructions from workers (flaggers).

Due to increased collision-related injuries and fatalities, certain roads are designated as “Safety Enhanced-Double Fine Zones.” Fines for violations are doubled in these zones and also in highway construction or maintenance zones when workers are present (CVC §42010).

Move Over and Slow Down

Drivers are required to move over a lane, if safe to do so, or slow down when approaching a stationary emergency vehicle or tow truck that is displaying flashing amber warning lights, or a Department of Transportation (Caltrans) vehicle displaying emergency flashing or amber warning lights while stopped on the side of a state highway or freeway. The law is designed to reduce the deaths of peace officers, tow truck drivers, paramedics, Caltrans employees, and other emergency personnel who are aiding stranded or injured motorists or involved in road work.

A diamond-shaped sign on a truck means that the load on the truck is potentially dangerous (gas, explosives, etc.). Vehicles which display these signs are required to stop before crossing railroad tracks.

Aggressive driving can cause many serious problems on the roadway. All drivers must be aware of both aggressive driving and the behavior known as “road rage,” and what to do when they occur.

There are two important things to be aware of regarding aggressive drivers:

Ways to avoid becoming an aggressive driver include:

The following are examples of common behaviors that can lead to aggressive driving and how to avoid them:

This website uses cookies to improve your experience while you navigate through the website. Out of these cookies, the cookies that are categorized as necessary are stored on your browser as they are essential for the working of basic functionalities of the website. We also use third-party cookies that help us analyze and understand how you use this website. These cookies will be stored in your browser only with your consent. You also have the option to opt-out of these cookies. But opting out of some of these cookies may have an effect on your browsing experience.
Necessary Always Enabled
Necessary cookies are absolutely essential for the website to function properly. This category only includes cookies that ensures basic functionalities and security features of the website. These cookies do not store any personal information.
Non-necessary
Any cookies that may not be particularly necessary for the website to function and is used specifically to collect user personal data via analytics, ads, other embedded contents are termed as non-necessary cookies. It is mandatory to procure user consent prior to running these cookies on your website.
SAVE & ACCEPT